This tours includes a visit to the Arms Industry Museum in Eibar and the workshop of the Aguirre y Aranzabal (AYA) shotgun company.

MUSEUM OF THE ARMS INDUSTRY 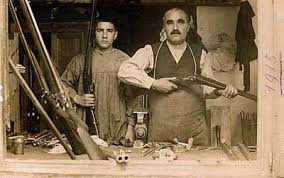 The Arms Industry Museum of Eibar is dedicated to the preservation and dissemination of the historical memory and industrial heritage of a town with a long tradition of arms manufacturing.
The museum houses, among its pieces, an extensive collection of weapons from different collections, such as the old Museum of the Armoury School, and a wide variety of products manufactured in Eibar (bicycles, motorbikes, sewing machines…).
Visitors can enjoy a journey through Eibar’s industrial history, from the 14th century to the present day.
The building in which the Eibar Museum is located is the Casa de Cultura Portalea, which originally corresponds to the old Aguirre y Aranzabal “A.Y.A.” shotgun factory, which in 1914 had 8 workers.
The building, which is very characteristic of Eibar, has a rationalist industrial typology and stands several storeys high. It was designed by the architect Raimundo Alberdi y Abaunz in 1926 and built at the end of the 1930s. In 1951, work began on successive extensions to the building, which were completed around 1960, the year in which the workshop was erected as it is today.
After the Civil War, in 1940, the company moved into this building and occupied it until the mid-1980s, when it became municipal property.
https://armia-eibar.eus/

AYA maintains a philosophy based on excellence in craftsmanship, where shotguns are manufactured and assembled by hand with a treatment that elevates each piece to the category of a work of art, but also represents much more. AYA is returning to its former role as a leader in the arms manufacturing industry in Eibar. By investing in machinery and technology, it has managed to become self-sufficient in parts for its own consumption as well as supplying other workshops in the area.
In this way, AYA not only carries on a long tradition of making good shotguns, but also works to ensure that Eibar’s gun industry will prosper in the future.
Since 1945, AYA has manufactured more than 600,000 shotguns of all types and grades.
http://www.aya-fineguns.com/